Germans from Russia settled in Mott

The History of the Stern Homestead in Mott, ND

In 2008 the Stern Homestead two miles east of Mott on Highway 21 was added to the National Register of Historic Places, the listing of our nation’s cultural properties worthy of preservation. The homestead tells a story of immigrant determination and work ethic of the Germans from Russia as they settled in a strange country looking for a better life. 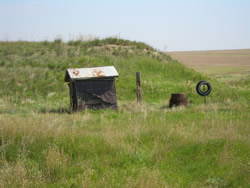 John Stern was born May 2, 1882 in Bessarabia, Russia and came to America in March of 1902. He took advantage of the Homestead Act and filed a 320 acre land claim in 1905. The acreage, two miles east of Mott, was blessed with an artesian Inside Stern Homestead Housespring that still flows to this day. The homestead was completed in 1907 and lived in by the Stern family for almost sixty years. The house-barn combination, which provided family living quarters, storage, and animal shelter all under a single roof, was common in the old country, but is fast disappearing from the northern plains. 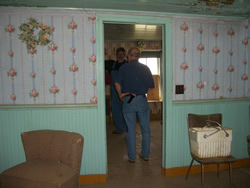 The architecture of the Stern Homestead stemmed from the immigrants’ prior experience over a century of living on the Russian Steppe. The traditional home design put the farm animals and feed close to the family living area, providing convenience, a source of heat and minimal contact with the fierce winter winds. Sandstone rocks that were a bane for many prairie farmers, proved to be valuable building material and the investment of back-breaking skill in erecting them has stood the test of time for the Stern family home. Many of these noble structures have been removed or deteriorated over the century, but the Stern home stands in remarkably good condition.

The Mott Gallery of History & Art worked for two years to present the Stern Homestead story for recommendation to the national list. They are honored to have been a part of this worthy historic project. Preservation North Dakota, a state organization dedicated to preserving important structures, recently presented the Stern Homestead with a “Success Story” award. 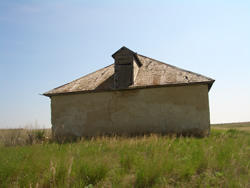 This summer the Mott Gallery will sponsor tours of the homestead. Tours at the homestead two miles east of Mott on Highway 21. Volunteer guides will be there to tell the story of German-Russian immigration and the John Stern family life on the North Dakota prairie.