We have a landing strip just south of town.

Air traffic is light in the Mott area, except maybe during hunting season. We are too far from any FAA antennas to talk to ATC. In fact hearing ANYONE on the radio is rare. Many area aircraft have no radios including the ag operators, so please stay vigilant when flying in and out of Mott. You can see in the photograph to the right that we are just south of town and quite close. In winter it is a good idea to call the manager to check on runway condition. It's possible that we didn't get out there to clear the snow yet. Keep in mind that our runway is in good condition, but it is narrow. If you are accustomed to landing on a wide runway, the optical illusion will trick you into thinking you are higher than you are. This will cause you to flare late and bounce like a basketball. 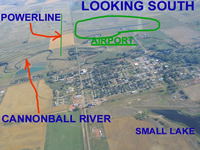 "The Mott airport is less than one mile south of the city".

We have 100LL avgas for sale. The airport manager is a farmer so he isn't at the airport much. Our airport now has the ability to read credit cards on the new fuel pump. So you can do a self-serve for fuel. (That is one reason the fuel is cheaper here. We don't have a line-boy.) We have four tie-down spots on the tarmac (ropes may not be there) and hangar space is sometimes available for rent by the day. We now have a small bathroom facility in the north building. It isn't real fancy, but it beats what we had before (nothing.) After you land and find the airport deserted, you can go into the empty office on the end of the south hangar and use the phone to contact anyone you might need to talk to. Please use your calling card for long distance.

Keying your microphone three times on the CTAF frequency (122.9) activates the runway lights. We do not have a rotating beacon. If you see a rotating beacon at night, you may be looking at Hettinger, North Dakota; Lemmon, South Dakota; or maybe Dickinson, North Dakota. The photos shown here are of our airport. The homebuilts and DC-3 were just passing through. 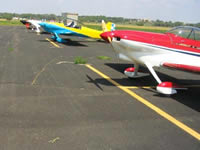 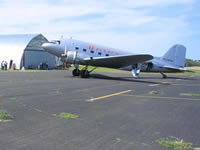 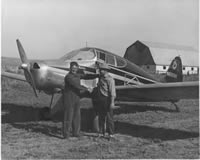 Isn't it interesting how some memories sort of stick with you over the years? My first ride in a small airplane is one of those memories. I can remember it like it was thirty-eight years ago. Come to think of it, that is just about how long it has been. My father and I were engaging in one of those father-and-son bike rides that we sometimes did together on Sunday afternoons. The Mott airport was just the right distance from home for a bike ride. Once in awhile there would be an airplane tied down near the grass runway and it was fun to look in the windows and wonder what it would be like to fly.

On that Sunday, we pedaled our way up the rutted, narrow dirt track to the top of the hill where the hangar stood. It was spring, when the planted fields of wheat were just starting to show a faint fuzzy green of the new sprouts. We arrived just about the time that Charlie Wyman was stepping up onto the wing of his Call Air. Charlie loved that old low-wing airplane and flew aerobatics over the airfield in it every Sunday afternoon. He had a set of snow skis for the plane and delivered groceries to snowbound farmers and ranchers after blizzards. My father greeted him and they exchanged a few pleasantries. "Where are you headed?" my father asked him.

"I'm going home," he said. "I just put gas in, and now I'll take the plane home and put it away." Charlie had a landing strip right at his house, which was only a quarter mile from the airport.

Nobody else was in the airplane. I was craving a plane ride, but my parents taught me to not beg and ask for things, especially from strangers. Timidly, but with all of the faint hope that I could muster, I asked my father, "do you think he would have room to take me along?"

"Have you got room for him?" my father called, just before Charlie disappeared into the cockpit.

"Well sure I do!" replied Charlie. "Would you like to go for a ride young man?"It was a silly question. Of course I wanted a ride. I hurried over to the plane and managed to crawl onto the wing and in the door to sit next to Charlie before he could change his mind.

The Call Air model A-3 was an unusual airplane. Only thirty-eight were built back in 1947 by the Call Air factory in Wyoming. The A-3 was a short takeoff and landing aircraft built to carry loads in and out of unimproved airstrips. Some of the features of this aircraft went into the design of the Husky, which is built at the same factory in Afton Wyoming where they built the Call Air many years ago. The A-3 resembled a spray plane with the tailwheel in back, the extra bracing and supports to the wing. The cabin held three people including the pilot, and everyone had to sit side- by-side on the long bench seat. A single seat belt stretched across all three laps.

The engine cranked and then roared to life. I remember it being noisy in the cockpit as Charlie taxied to the end of the runway. Back then the airport was just a grass strip. I can't tell you which made more noise, the grass clumps hitting the main wheels or my heart beating in my chest. I just remember a lot of sound after the engine power was increased to maximum and the little plane slowly accelerated down the airstrip.

When the ground fell away and we began climbing, the bumping and clattering stopped and the loud engine noise dominated the cockpit. I could hardly breathe. The roads, trees, houses and cars rapidly became smaller and smaller. The first time that Charlie banked the plane to make a turn, I thought my heart would stop. We made a slow pass over town and I looked for my house. Mott looked just like one of those toy cities that people spend their entire life building in their basement for their model railroad. For a first grader, it was too much for words.

The ride was over in a matter of minutes. We bumped down onto Charlie's hay field and taxied up to the shed near his house where the plane was kept. My Father was just walking into the yard, guiding a bicycle in each hand. I probably forgot to thank Charlie but I am certain that Dad reminded me.

I felt pretty special the next day in school. Very few of my classmates had ever gotten to fly in a small plane. Even so, my friends acted disinterested when I told my story of the plane ride. They were just jealous, I'm sure.

Charlie Wyman and an unidentified man in front of Charlies 1947 Call Air. Photo taken in the 1950's.