How We Got Our Name "Mott" 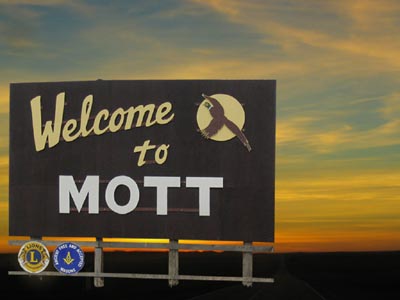 A MYSTERY SURROUNDING THE SOURCE OF MOTT'S NAME
By Owen Blickensderfer

Many people who visit Mott are curious where the name came from. They ask if we make applesauce here. No, they make Mott's Applesauce in someone else's town. Someone whose last name is Mott told me that the name originally came from the French "De La Motte," meaning "of the hill." From this we might surmise that one of the early French trappers who dodged Grizzly bears and risked frostbite might have built a cabin beside one of our beautiful hills and called it "De La Motte." (Yes, grizzly bears terrorized the prairie back when Lewis and Clark came through here.) No, that is not it either.

A man by the name of William H. Brown, a land developer, platted the town site of Mott. He was the owner of the Wm. H. Brown Company. Mr. Brown also platted nearby Odessa, Haynes and Flasher. Judging by how much land he developed and sold in North and South Dakota, I would say that he was an extremely shrewd operator and a very wealthy man. The construction of our fair city commenced in 1904 with the building of the Brown Hotel. Mott has the distinction of not having a "Main" street. Instead, we have " Brown Avenue" in honor of the man who first promoted our city and made some of his fortune selling pieces of it to people. If someone from Mott gives directions to Main Street, they really mean Brown Avenue. As far as I know, Brown never lived in Mott.

Where was I? Oh yes, where Mott got its name. Mott is a common family name. Lots of folks with the last name of Mott can be found all over our great nation. None of them live in Mott. For that matter, few live in North Dakota. Well, it turns out that Mr. Brown had a secretary named Miss Lillian Mott. Miss Mott lived in several places in Minnesota, South Dakota and North Dakota while working for Brown. I do not think Lillian ever lived in Mott. She was, no doubt, an efficient and knowledgeable person, as all good secretaries are. Miss Mott later married and became Mrs. C.L.Cummings and lived in Minneapolis.

Back then the Northern Pacific Railroad had an Immigration Agent named Charles W. Mott. One early reference to him calls him "Colonel" C.W. Mott. This makes me wonder if he served as an officer in the civil war. If so, which side was he on? Anyway, Mr. Mott probably increased the influx of Europeans to buy and settle the land sold by Mr. Brown. Brown and Mott appear to have been acquaintances. Perhaps Brown was grateful to Mott for helping him sell land to Europeans.

This is where things get interesting. A Mott history completed in 1935 by Mrs. R.E. Trousdale and Mrs. H.O. Pearce states that Mott was named for C.W. Mott, the railroad guy. An article from a 1936 issue of the Hettinger County Herald states that Brown named the new town site after Lillian Mott, his secretary. References to these articles come second-hand from pieces published many years later, so I have not personally laid eyes on the original articles.

Kevin Carvell, former Mott resident and avid historian, has a brochure promoting Mott from 1909. The William Brown Company created and distributed it. It says in part, "And has a busy commercial club and a bank and a reputation to live up to, as she was named after C. W. Mott, the Commissioner of Immigration of the Northern Pacific R.R." This is the earliest reference that we have on the subject of Mott's name. I consider it the most reliable source to date. Bear in mind that it is possible (and even likely) that Brown named his town after both individuals. We cannot ask him. He is dead.